Gudangaay Tlaats’gaa Naay Secondary joined students all around the world by participating in a global youth climate strike on March 14th at 1pm. Youth from the Damaan Tlagee Society Protecting the Land gathered with their classmates to raise awareness locally and internationally, with Haida Citizens and Haida Gwaii Residents joining in support.

GwaaG̲anad Diane Brown started the event in prayer. Haida Gwaii youth then started their march through G̲aw Massett starting in front of Gudangaay Tlaats’gaa Naay, up to the Village of Massett Office, and down Main Street, where they gathered in front of Delmas Co-op. Damaan Tlagee Society addressed the students and public that gathered. Midori Campos then read a supportive speech from her aunt Kihlguula Gaay.ya Severn Cullis-Suzuki, who unfortunately could not attend the event.

After the speeches the youth brought forward a petition to ban single-use plastics on Haida Gwaii as a first step towards making a difference. The petition received 37 signatures and about 100 students and community members gathered in support.

The Global Youth Climate Strike started in Sweden in 2018 when Greta Thunberg (16) learned about climate change and the inaction of society. She started skipping school once a week to protest in front of Swedish parliament in Stockholm with a sign that said “School Strike for Climate”. The movement has grown globally, with groups of youth and adults from hundreds of countries gathering together to demand that leaders take action against climate change. 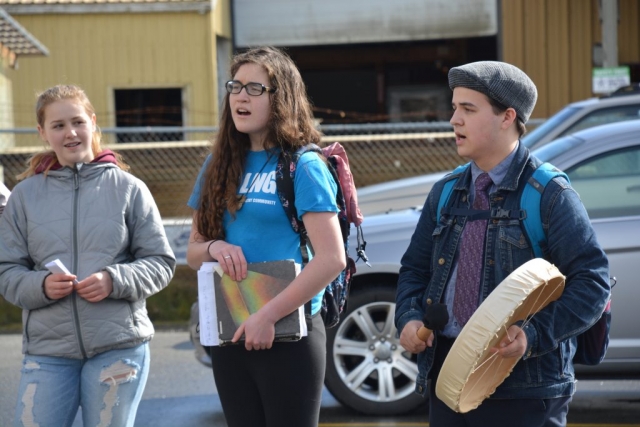 On October 25, 2019 Haida youth Haana Edenshaw joined thousands in a climate strike and joined 14 other youth activists in filing a lawsuit against the federal government for their lack of action on climate […]

Rhonda Lee McIsaac From the first participant application to the last video posted on social media, almost 100 young Island citizens have rejuvenated the power of youth leadership, the strength of community, and the unity […]